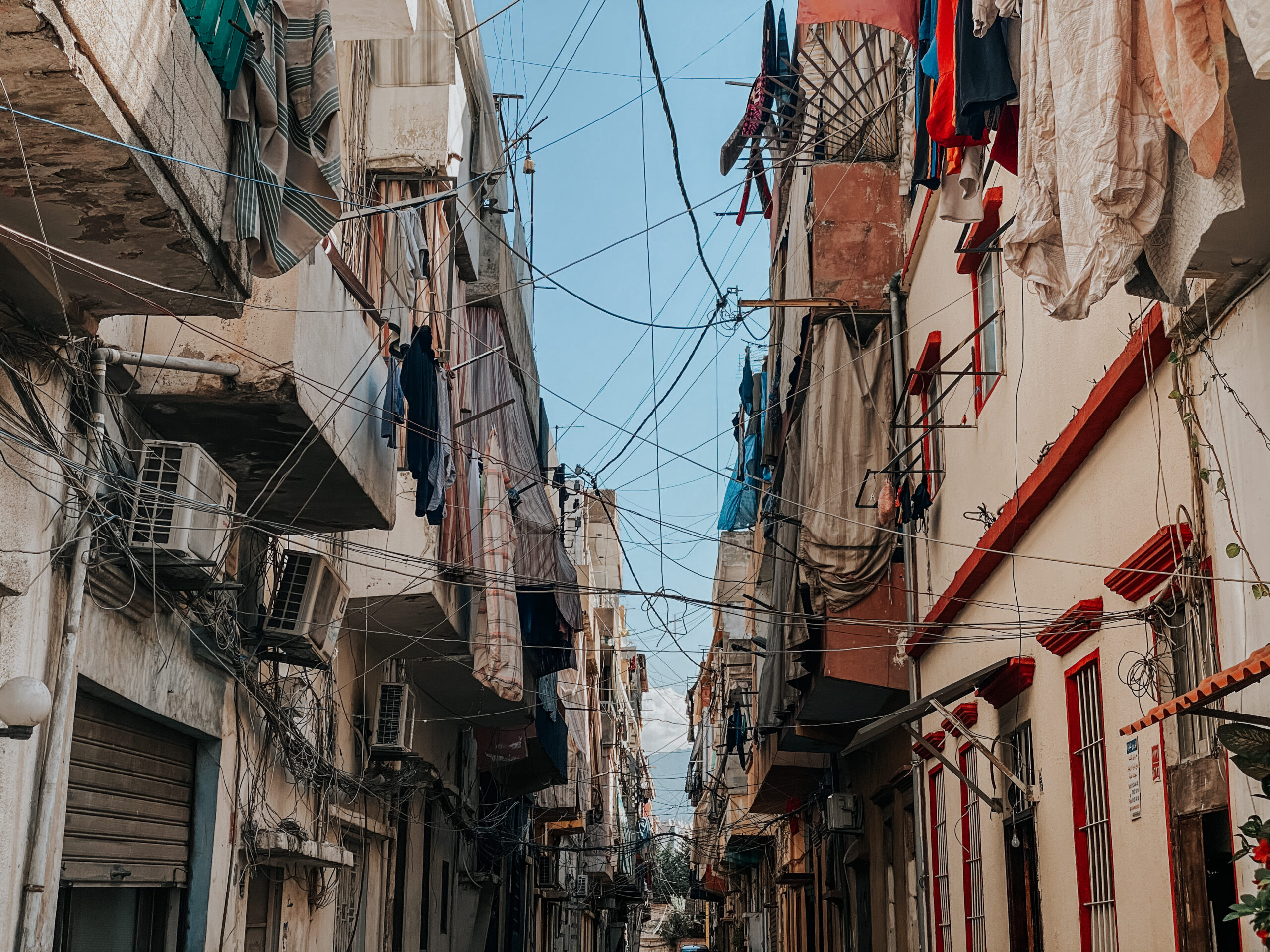 A street in the densely populated suburb of Nabaa, Bourj Hammoud

Policymakers in Lebanon argue that displaced people, particularly Syrian refugees, are one of the causes of the country’s failing economy. Syrian refugees are often blamed for the lack of electricity, water, jobs and even bread.

At a conference in Brussels in May, Lebanon’s Minister of Social Affairs, Hector Hajjar, declared that hosting Syrian refugees has had negative economic consequences for Lebanon. He accused Syrian refugees of benefiting from “state-subsidized services” and being responsible for “the loss of many job opportunities for the Lebanese… without contributing… taxes.”

A key focus of Hajjar’s comments on services relate to energy subsidies. In reality, however, Lebanon had experienced blackouts for years before Syrian refugees arrived. As Zachary Davis Cuyler argues, ‘the 1975–1990 civil war witnessed the large-scale physical destruction of infrastructure. Postwar reconstruction did not deliver functional refineries or reliable electricity’.

Lebanon’s energy regime became characterised by a set of interconnected vested interests that enabled it to persist despite its inefficiencies. These vested interests include politicians who received kickbacks on high-cost electricity purchases from Turkish mobile power barges, fuel importers who formed a close-knit cartel, and politically connected private generator owners whose wealth and power grew in the gaps created by the state’s shortcomings. Thus even if no refugees moved to Lebanon, blackouts would still occur as a result of decades of utter mismanagement, and the level of energy subsidies would still be an issue of contention.

Hajjar’s comments on employment imply that cash assistance allows Syrians to work for lower wages, pricing out the Lebanese workforce in certain industries. Yet refugees are underemployed, and those who do work are underpaid. Our surveys in displacement-affected communities show that refugees’ employment does not exceed 25%.

The truth is that the economic crisis has amplified poverty among both refugees and ‘host’ communities. Resources and jobs have become increasingly scarce. Due to the economic crisis, hundreds of businesses have closed or reduced personnel over the last two years, and wages have been cut for many of those who do continue to be employed, exacerbating poverty and hardship.

According to the United Nations, nine out of ten Syrian refugees are impoverished. Salah (not his real name), originally from Homs but now living in Tripoli, said: “We have a very bad financial situation… I don’t have a fixed job and I’m currently not working. We don’t have water or electricity… We are unable to buy meat, oil, and milk.”

According to our qualitative interviews, the vast majority of displaced people prefer to be relocated to other (third) countries. Human rights organisations such as Amnesty International are clear that Syria is not a safe place to return to, as returnees may be subjected to intimidation or even direct violence. As Saddam (not his real name), originally from Homs but now living in Bekaa, explained: “Our relatives went back to Syria and were threatened and detained… One of our friends was detained in Homs for several months… He’s not mentally well anymore.”

The current official narrative is that refugees are an economic burden. As a result, attitudes toward refugees have changed locally, and inter-communal relations are getting worse, particularly since the start of the economic crisis. Hate speech and falsehoods being spread by some Lebanese media only aggravate this negative situation.

Syrian refugees are being used to detract attention from the Lebanese government’s failure to deal with the economic crisis. They are also being used as a card in an international aid poker game with potentially US$3.2 billion at stake. In other words, the Lebanese and Syrian governments, as well as the donor community and other great powers, address displacement through the lens of their own limited political objectives.

Refugees did not cause Lebanon’s current financial crisis. The country’s elites are responsible for that. As Sahar Atrache highlights, contrary to popular belief, Lebanon has benefited from the presence of refugees. Along with substantial levels of international aid injected into the economy, refugees have contributed to the development of novel approaches to promoting sustainable livelihoods. Syrian and Palestinian refugees have contributed to the establishment of businesses that not only address a range of community needs but also enrich the local culture.

Claude Samaha is Lead Researcher at Basmeh & Zeitooneh and a member of the Protracted Displacement Economies (PDE) team. PDE is a project funded by UK Research and Innovation through the Global Challenges Research Fund (grant reference number ES/T004509/1).