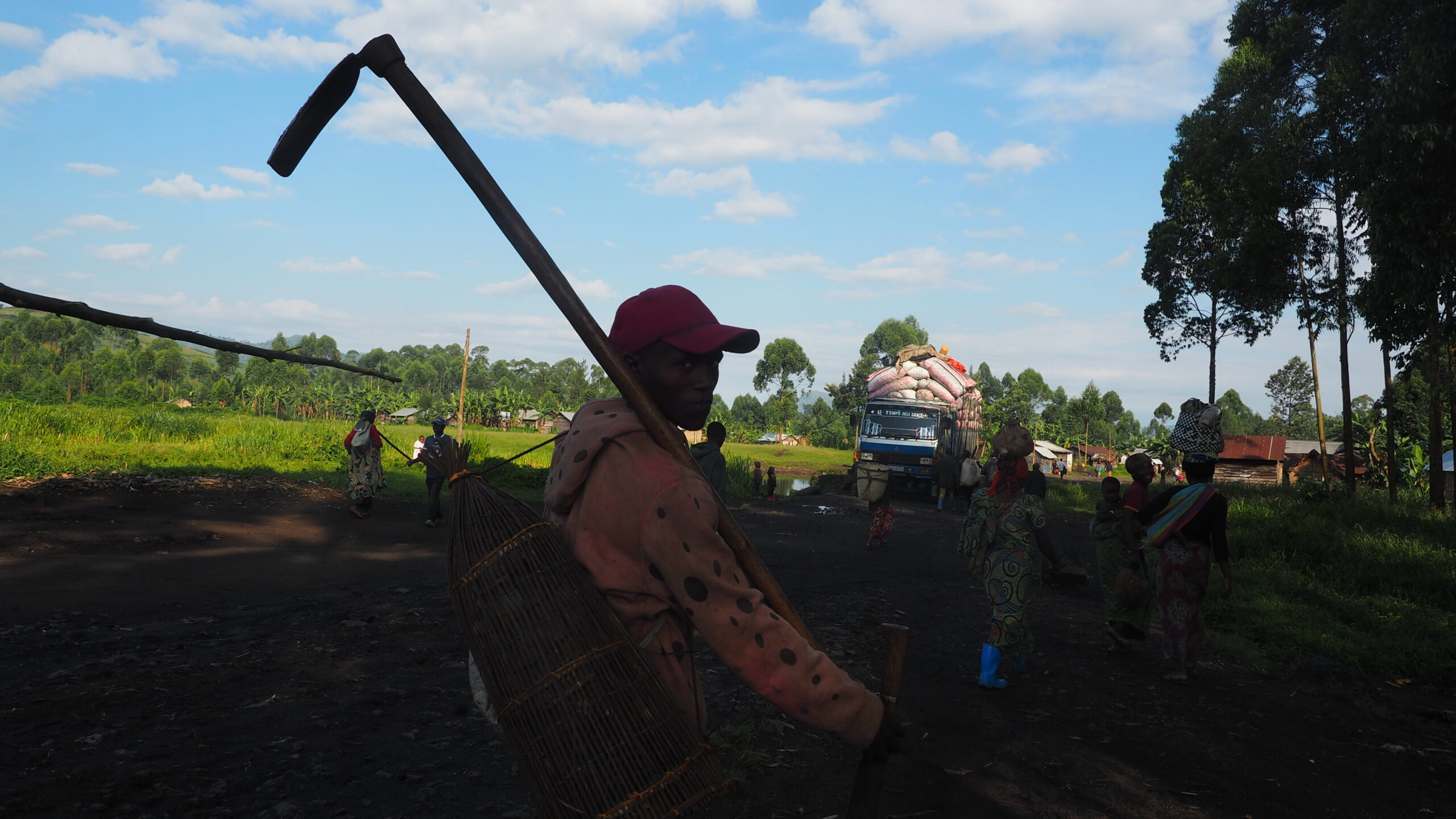 Generally settled in planned camps – with or without the support of the United Nations Refugee Agency (UNHCR) – displaced people in the Democratic Republic of Congo (DRC) also find themselves living in ‘host’ communities or simply managing in makeshift lodgings. Their mode of subsistence is as diverse as the causes of their protracted displacement. This blog post highlights the resilience of displaced people in Masisi territory, particularly those settled in Kitshanga, one of our research sites.

The scarcity of arable land around Kitshanga

Masisi is one of six territories in North Kivu province. This province accounts for 34.6% of all internally displaced persons (IDPs) in the country. Moreover, the DRC’s 5.2 million IDPs represent more than 10% of the 48 million IDPs in the world. The area around Kitshanga is particularly impacted by intermittent clashes involving national and foreign non-state armed groups, as well as the Congolese national army. This area is also heavily impacted by land grabbing carried out by armed groups and by the owners of huge commercial landholdings, many of whom are said to be actors in the violence in the region. Armed conflict and land grabbing are causing mass forced displacement, with people fleeing to Kitshanga, yet lacking land to cultivate in order to meet their needs.

During research in Kitshanga, we observed a kind of ‘agricultural labour market’. Rwandan ‘refugees’, who do not actually have legal refugee status but are locally known as refugees and settled in Camp Mungote, do not have many resources. Many of them have been displaced since the 1990s. In the past they received aid, in the form of food and non-food items, from UNHCR and other humanitarian organisations. Nowadays, however, they hardly receive any support from such organisations. Therefore these ‘refugees’ survive almost entirely via informal activities, especially agricultural labour, through which they also contribute to the local economy.

The place where they gather in the morning, right next to Camp Mungote, is called ‘Mana pfasha’, which in Kinyarwanda, the language spoken by Rwandan refugees, means ‘God help me’. Every morning, the displaced people, mostly Hutus (the majority ethnic group in Rwanda), stand at this place, just next to the road, each with their own tillage tool (hoe, machete or axe). They wait for a ‘boss’ who will come and select them for agricultural work.

It is largely women who are hired to weed fields and transport loads (25 to 50 kgs) of cassava or bananas. Payment for this work is derisory: between 500 FC and 1500 FC (US$0.25 – US$0.75) per day. Ploughing fields is generally reserved for men who are perceived to be strong. Yet the payment for this work is not much higher: 1500 FC to 2000 FC (US$0.75 – US$1) a day. Older persons are usually completely excluded from any sort of agricultural work (and therefore are particularly vulnerable). Children of displaced people are selected for this type of work, but they tend to be paid much less than adults.

Nikuze (not her real name) is a Rwandan refugee who has lived in Camp Mungote since 2014. She is a widow and mother of four children. Every morning, she goes to Mana pfasha, and is always chosen by a ‘boss’ for daily work. During our team’s last visit to Kitshanga, she said:

“In the camp, it is always difficult to find a job to survive. You have to go out and go to work either in someone’s fields, or in someone’s house, or go and get by in the city, in the market, etc. But the safest activity is working in the fields… with that, I am sure to have my ‘present’”.

The term ‘present’ alludes to the attendance check that is usually carried out in factories or companies; when the boss calls the worker, the latter answers “present,” to mark their presence at the place of work. Here it represents the amount received by the agricultural worker.

A lack of humanitarian assistance and precarious employment mean that the village savings and credit association (AVEC – Association Villageoise d’Epargne et de Crédit) and a rebate called ‘likilimba’ play an important protective role in Kitshanga. Each member of AVEC saves a certain amount of money each week, usually from 5000 FC to 20,000 FC (US$2.5 – US$10). Over time, and depending on their needs, the member can apply for a loan, and the AVEC management grants the member an amount in proportion to their weekly savings. The amount lent to the member can be up to 100,000 FC (US$50). ‘Likilimba’ involves members of a given group contributing a small sum of money daily for a period of time, and the total stake is then given to a member to help them with their needs. According to Nikuze, the local microfinance system greatly helps displaced people to meet the basic needs of their families, and even to rent a field for a season, or to start a small chicken or livestock farm, so as to increase their income, and thus improve their lives.

Ultimately, despite the scarcity of land in Kitshanga and its surroundings, the Rwandan ‘refugees’, who are displaced people and therefore vulnerable, manage to survive. They constitute the bulk of the local agricultural workforce, and have built a reputation for honesty and loyalty. Over time, this community has developed strong links with certain ‘bosses’, who now employ some of them, like Nikuze, almost daily. And this helps them to withstand the vicissitudes of life.

José Mvuezolo Bazonzi is the Coordinator of Groupe de Recherche et d’Etudes Stratégiques sur le Congo (GREC) at the University of Kinshasa, and a member of the Protracted Displacements Economies (PDE) team. PDE is a project funded by UK Research and Innovation through the Global Challenges Research Fund (grant reference number ES/T004509/1).